If I revisit 2014, Vishal Bharadwaj’s “Haider” would still be my movie of the year. It was pure brilliance in Hindi film making – from almost all aspects. Looking back at 2015, I am glad we do have some very fine films to talk about. They are reflection of our maturity as a filmmaking nation obsessed with cinema. Also, another remarkable point to be noted is that many of the such films were told stories rooted in Indian ethos (“Masaan”, “Dum Laga Ke Haisha”, “Piku”, “Tanu Weds Manu Returns”, etc) or were inspired by the real life incidents or history or took from incidents happening around us (“Talvar”, “Bajirao Mastani”, “Bajrangi Bhaijan”, etc.). The storytelling got lot more real, with it shedding the trademark (and excessive) melodrama and also annoying sprinkling of song-and-dance sequences. Read on…

Masaan – Hindi cinema at its Best 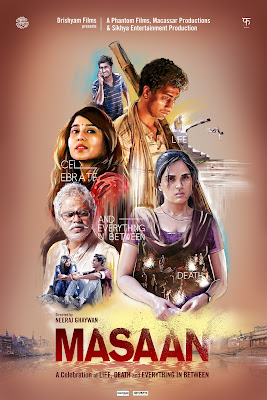 If there is one movie that moved me completely with its story and honesty (of storytelling), it has to be Neeraj Ghyawan’s “Masaan”. I remember watching “Masaan” and “Bahubali-The Beginning” back to back that day (and in that order), and I could barely concentrate on the year’s ‘magnum opus’. Set in present-day Varanasi, a holy town in Uttar Pradesh, ‘Masaan’ depicts life with such honesty that it disturbs you, even as it leaves you with hope at the end. It captures lives of two characters. First is Devi Pathak, a poor upper caste girl, who aspires to get a in the Railways. She has been brought up by her father, after her mother’s demise. But their lives are devastated after UP Police “apprehends” her “red handed” inside a hotel with her boyfriend. The police, tipped off by the hotel staff, harass them for “obscenity”, and blackmail them. Second is Deepak, a lower-caste boy, who studies to be an engineer during the day, later helps his father and elder brother in burning human corpse at the ghats. He is in love with an upper caste Baniya girl, Shalu, who is a romantic at heart, doesn’t believe in social hierarchy and loves Hindi poetry. But soon the social realities of the life strike both of them. The interplay of local stories and sensibilities, and Hindi poetry of Dhushyant Kumar, Brij Narayan Chakbast, etc. is a delight. When did we last have a movie so well written, well made, well-acted, and rooted in Indianess?

The film won the prestigious International Federation of Film Critics Award and the Promising Future Prize in the Un Certain Regard section at the 68th Cannes Film Festival. This is the kind of cinema we should be proud of showing off to the West, and back home too. 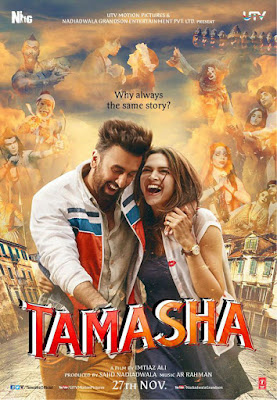 The next notable film of the year would be Imtiaz Ali’s ‘Tamasha’. (Disclaimer: I have not yet seen “Dilwale” (Winks!!) or “Bajirao Mastani”). I know it tanked at the box-office, but if you have seen it (by mistake), I am sure, it made an impact on you. This is perhaps Ali’s best work after “Socha Na Tha” (2005) (my all-time favourite among his films) and ‘Jab We Met’ (2007). In the meanwhile, he made “Love Aaj Kal” (2009), “Rockstar” (2011), “Cocktail” (2012), and ‘Highway’ (2014). But “Tamasha” is quite effective in what it aims to convey. Through a love story, he makes a commentary on the mechanized lives we lead in the cities, including mechanically being in love. The film is about being true to yourself and finding who you are. Ali’s tells you ask yourself – Are you really the corporate guy you portray to be day in and day out? Maybe you are the ‘Don’, out to get ‘Teja’s sona’ with your ‘Mona’? If you haven’t yet, just check it out – first the movie, and then who you really are in this life! (PS: Financially, it did just average business of about INR 65.50 crores. But don’t they say – Whatever is popular may not be right; and whatever is right may not be popular?)

Well, Rohit Shetty’s “Dilwale” is almost there in Top 5, with 102.65 Cr* already in its credit. What worked? That’s simple: SRK, SRK, and Kajol.
(*Movie is still running in threatres)

There were many films in 2015 which deserve a mention for their stories and their success in telling those stories. They are can be put in the bracket where we celebrate “good content” (against the blind money chase, via star powers). It begins with a good story. And we did have some interesting slice-of-the-life stories on 70 mm, thanks to some excellent works by Varun Grover (“Masaan”) Juhi Chaturvedi (“Piku”), Himanshu Sharma (“Tanu Weds Manu Returns”), Imtiaz Ali (“Tamasha”), etc.

1. Varun Grover: He wrote (with Neeraj Ghyawan) that touching story of “Masaan”. He also wrote lyrics for the film, and also for “Dum Laga Ke Haisha” (remember ‘Sundar Shusheel..’ and ‘Moh Moh Ke Dhaage…’) and “Gangs of Wasseypur” (who can forget – ‘Jiya Ho Bihar Ke Lala, O Womaniya, and I am a Hunterr?).

2. Sharat Katariya: For ‘Dum Laga Ke Haisha’. The second half of the film was completely flawed, but first of the film was quite great. Greatly rooted in Indianess, it brought on screen a slice-of-life take on two lower middle class families of late 90s, and the era of music ‘cassettes’. (PS: Hope Yashraj Films will not do another experiment of uniting lovers via contests. In “Rab Ne Bana Di Jodi” it was a dance competition, and in “Dum Laga Ke..” it was wife-carrying. Quite “heavy” stuff!)

3. Juhi Chaturvedi: “Vicky Donor” was successful primarily for its story written by Juhi Chaturvedi. And “Piku” is no different. Delivering a hit film revolving around ‘shit’ (or ‘no shit’) has to be a writing wonder. Kudos, Juhi!

4. Himanshu Sharma: “Tanu Weds Manu (Returns)” returned this year, and so did the writer of original “Tanu Weds Manu” (2011). The sequel was sheer writing genius, except for the climax which was most disappointing and unconvincing given the rest of the movie. Sharma did a fantastic job of creating a Tanu look alike and then revolving the story of rediscovery of love between Tanu and Manu in the second instalment. He, along with Kangana Ranaut’s super performance and Anand L Rai’s direction, took the film to another level. The film received critical appreciations from most critics, and made over 150 crores. What a wapsi, it was! (PS: His “Raanjhanaa” was a good attempt too. But it meandered in its effort to include too many things at once – unrequited love, activism, contemporary politics, etc.)

5. Imtiaz Ali: Well no one represents contemporary love on cinema like he does. But with “Tamasha”, he went beyond. The film is not just about two contemporary lovers, but about the so called ‘modern’ (read ‘mechanised’) lives we live – with time scheduled for everything, including love. It’s an apt commentary on the times we live in and it stirs & shakes you to question yourself for not doing what you love.

Few years back, it would have been hard to imagine a Bollywood film without a song-and-dance sequence which irritatingly break the pace of story. But things have changed, with a few unconventional filmmakers breaking the rules in the film industry. Here are a few films (besides those mentioned above) which deserve a mention for their exception efforts to redefine Indian cinema.

1. “Talwar”: For creating a convincing crime thriller on India’s biggest ‘whodunnit’ –Aarushi-Hemraj double murders. Written by none other than Vishal Bhardwaj himself and directed by Meghna Gulzar, the film meticulously captures two versions of the case – that of the police and the parents’.

2. “Detective Byomkesh Bakshy”: For giving us our own detective saga, after years. Though it was a bit over dramatic and dark (lack of light, I mean), still a good attempt, helmed by Dibakar Benerjee.

3. “Badlapur”: Sriram Raghavan’s gripping revenge drama – with a fine performance by Nawazuddin Siddiqui. Quite a thriller it was.

4. “Hunterrr”: Produced by Phantom Films (of “Queen”, “Lootera” fame) and written and directed by Harshavardhan Kulkarni, this Indian adult comedy looked like a good attempt in the genre. Was this better film than “Kya Kool Hain Hum”? Well, perhaps. But nowhere close to “American Pie” series.

5. “Margarita, with a Straw”: Well it’s not another “Sparsh” (Sai Paranjpye, 1980), still its writer-director Shonali Bose deserves applauds for making a ‘mainstream film’ about a teenager with cerebral palsy, played by Kalki Koechelin.

6. “Baahubali – The Beginning”: For the sheer guts and vision of S.S. Rajamouli to give to the world India’s visual magnum opus.

7. “Drishyam”: Well it arrived a tad too late in Hindi, but Nishikant Kamat’s film was good and received well by the audiences. First made in Malayalam in 2013 by the same name, it was quickly remade in Tamil, Kannada and Telugu.

8. “Manjhi-The Mountain Man”: Well, after a point it got repetitive (Manjhi going to break the mountain), and the progress of his feat was not captured well, but Nawazuddin Siddiqui’s performance made it worth a watch. Director Ketan Mehta deserves praise for attempting such a subject, from India’s hinterland, on the big screen.

9. “Pyaar Ka Punchnama 2”: Well, I am a super fan of this anti-love film franchise. The first one was amazing, as the concept itself was unique. But the second instalment, by director Luv Ranjan, was not bad either. In fact, quite enjoyable. Yes – ‘Liquid’ was missed, but then it kind of was fine.

10. “Baby”: When you watch English films like “Argo” (Ben Affleck, 2012), you wonder why we don’t have our own action-thrillers like that. Our own “Baby”, quite an edge-of-the-seat thriller (sans any major song-and-dance), come close.

Afterword: Where did that small beautiful film go?

In present-day maddening marketing scenario, where big films and big stars scream and shout about their films, it’s time we thought seriously about how to promote our indie films. For big films, there’s actually a rush among people to catch their earliest shows. But that’s not the case with small but good films. We need to have a sustainable exhibition schemes for smalls films so that people can catch them even after a week of their theatrical release (by when the word-of-mouth build up). Can big stars or production houses ensure one or two shows of such films keep running at a few cinemas? Not some fancy cinema halls with elite ticket pricing. Even not-so-elites should be able to watch these indies. Or do we all believe that only a section of the society can understand such cinema? I don’t think so. Also, these films hardly find takers among TV channels, who otherwise make a beeline for bog films like “Bajrangi Bhaijaan” or “Dilwale”. So, there is no chance of catching these on TV. Can state-run Doordarshan (DD) give a slot to them? The films I am pointing towards are Chaitanya Tamhane’s “Court”, Ananth Narayan Mahadevan’s “Gour Hari Dastaan”, Kanu Behl’s “Titli”, Anup Singh’s “Qissa”, etc. What’s the point of a good film sitting in a film can?

Here’s looking forward to even better year at Cinema in 2016.

[1] http://www.koimoi.com/box-office-bollywood-films-2015-profit-ranking/
[2] Top 5 list from http://www.bollywoodhungama.com/box-office/top-grossers
Posted by Shambhu Sahu at 00:16 No comments:

Shambhu Sahu
I am a journalist turned book publisher. During my stint as a journalist, I wrote mostly on cinema and TV entertainment. This blog features my writings which primarily include film reviews, film features or poetry or 'sher's. Whatever I write here is not at all meant to offend anyone (living or dead) in any manner. Please feel free to share your complements, comments or critique. Your feedback is always welcome! Thank you!